Have you ever had your spouse come home and tell you about a work celebration he forgot to mention? That’s exactly what happened two weeks ago, and as annoyed as I was at first, this blog only begins to share the eye-opening and heart-opening experience I had.

I was seated next to a beautiful and accomplished woman, whom my children had the opportunity to run machinery with her last summer. After a few weeks of training, they were shocked when told that Miss Amanda had spent time in jail. I too was amazed by her story and the redemption she is living out. Please read on about how Amanda was redeemed, and how we can change our lives through forgiveness.

Recently I was invited to a celebration dinner of my husband’s colleagues. I was seated next to an attractive woman, dressed in a black dinner suit and heels. She wore her hair pulled back in an exquisite twist and a smile that welcomed everyone.  Her words were soft-spoken and full of gratitude. As she stood to share her story with the larger group, it struck me how similar our lives were.  Amanda had been an A student, member of the honor society, a college graduate, and had a 13-year corporate career, working 75-hour weeks. She is attractive inside and out, accomplished and ambitious.

Her accomplished life changed when weekend partying went bad. Amanda’s “a” descriptors changed to addicted and ashamed. Even though her family was nearby to help, she was too ashamed to ask. She lost everything: career, saving accounts, stability and boundaries, gaining nothing but 100 pounds.  She started pulling away from those she loved. Month after month of not answering the daily phone calls and texts her parents sent, they received news that their daughter was alive. Can you imagine? Hoping day after day for your daughter to answer your call: praying for a slurred call, desiring an incoherent text, anything to know she is still alive. You are the parent watching the horizon, hoping for a glimpse of your child on their way home.

Amanda is the modern-day Prodigal Child after sowing her wild oats. (Luke 15:11-31).

She will tell you that jail saved her. It gave her time to ponder her reality: How did I get here? What do I want from life? Where can I go from here? As she gained sobriety, she set out to succeed again, even if success would be capped working at a fast food restaurant. She enrolled herself in the most challenging rehabilitation program, while she built a personal relationship with the Lord. She said, “I went through hell and I wouldn’t change it.”  As I listened to her share her new life, it stood out that the words Amanda used were mainly “h’s”: Hope, Healing, Health, Happiness, ask for Help, and that life is no longer Harsh.

This is the redemption power of Jesus.

As I sat to write this blog, thanking God that the celebration dinner was perfectly timed for our Good Word REDEEM, another Bible story came to mind, that of the Adulterous Woman. 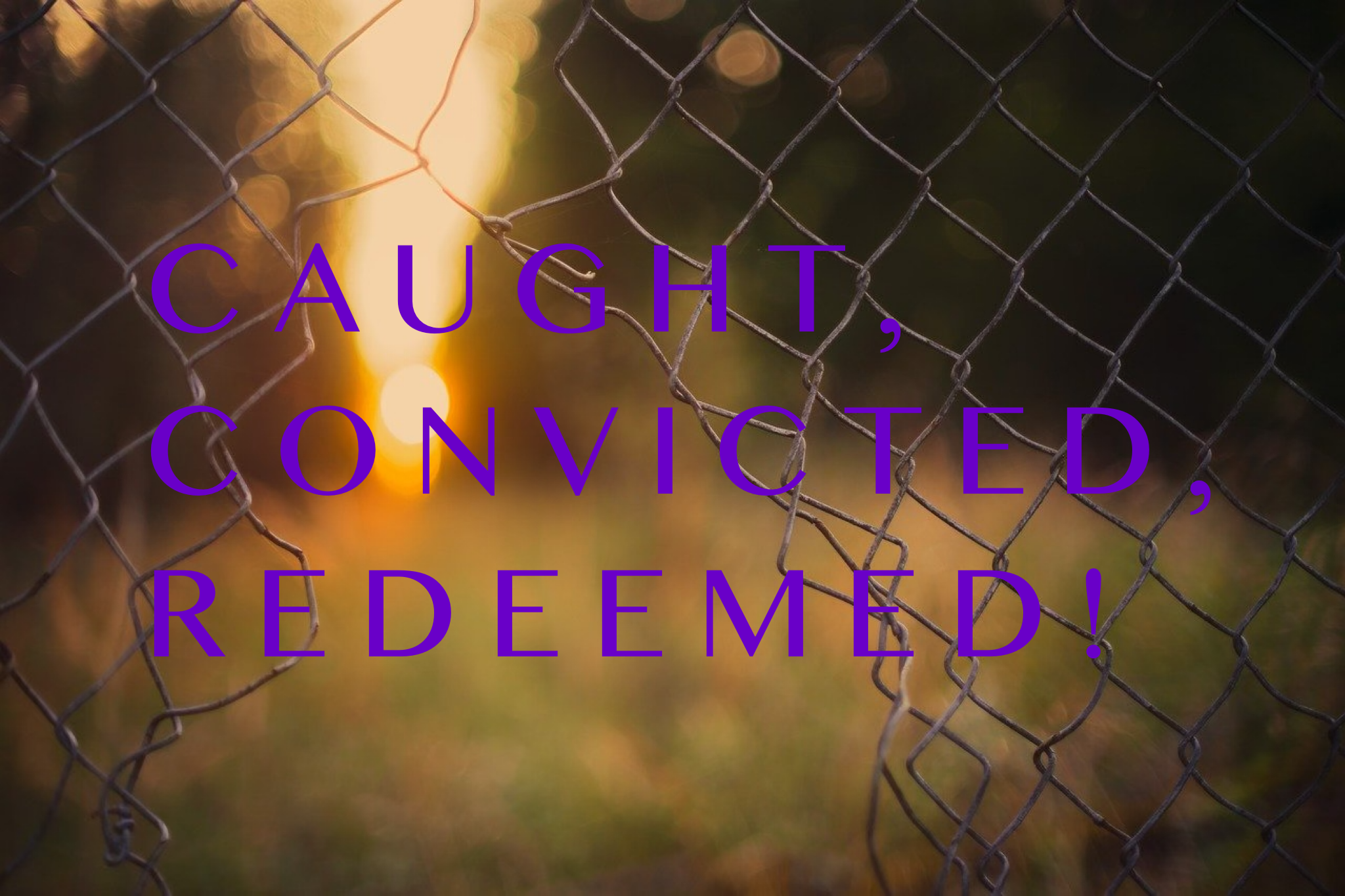 Jesus went to the Mount of Olives. At dawn He appeared again in the temple courts, where all the people gathered around Him, and He sat down to teach them. The teachers of the law and the Pharisees brought in a woman caught in adultery. They made her stand before the group and said to Jesus, “Teacher, this woman was caught in the act of adultery. In the Law Moses commanded us to stone such women. Now what do you say?” They were using this question as a trap, in order to have a basis for accusing him. But Jesus bent down and started to write on the ground with His finger. When they kept on questioning him, he straightened up and said to them, “Let any one of you who is without sin be the first to throw a stone at her.” Again, he stooped down and wrote on the ground. At this, those who heard began to go away one at a time, the older ones first, until only Jesus was left with the woman still standing there. Jesus straightened up and asked her, “Woman, where are they? Has no one condemned you?”   “No one, sir,” she said.  “Then neither do I condemn you,” Jesus declared. “Go now and leave your life of sin” John 8:1-11.

A group of well-respected men and religious leaders brought forward a woman who had sinned. They didn’t bring her lover to put on trial, only her. A crowd was already present, after listening to Jesus teach. Yet, with a few simple words “Let any one of you who is without sin be the first to throw a stone at her,” they all slipped away; no one remained. Was Jesus writing their sins in the sand? Was His pause long enough for their conscience to convict them? We don’t know. All we know is He didn’t judge her. Jesus showed forgiveness and compassion as He suggested she take this opportunity to change her life.

No human is free from sin. On any given day, we are tempted to tell a fib, “forget” a few golf strokes, curse…or worse.

“Did you ever smoke pot or take any illicit drug? Drive intoxicated? Trespass? Shoplift or otherwise steal? Vandalize? Get into a physical fight? If you answer “yes” to even one of these questions, then you committed a crime. Had you been caught and convicted, you could have rightfully been considered a criminal”.

This is the question posed by author Jeff Korzenik* in his book: Untapped Talent – How Second Chance Hiring Works for your Business and the Community (page 46). Korzenik directs his readers to their own youthful experiences because many of us have the good fortune of not getting caught.

Why do we cast stones at others when we ourselves sin?

The first step in moving forward to changing our life course is humbly asking God for His forgiveness. Then speak self-forgiveness out-loud (it can be to yourself or a confidante), specifically repenting your poor decisions and asking the Holy Spirit to fill you with peace. Finally, offering forgiveness to others (again out loud, but not necessarily to them) for the specific ways they contributed to your sinful patterns. The list might be long, but the exercise is well worth the time and effort. Strange as it sounds, as you finish by praying blessings over those who hurt you, you will feel blessed yourself. This is the redemption power of Jesus healing you. As you are working through these areas, continue asking God to strengthen you and the Holy Spirit to protect you in your weakest areas. Taking the time to address the pain and anger can bring you incredible freedom. Plus, how can we hold a grudge against anyone, if the Lord forgives us completely?

“Get rid of all bitterness, rage and anger, brawling and slander, along with every form of malice. Be kind and compassionate to one another, forgiving each other, just as in Christ God forgave you” Ephesians 4:31-32.

All of us can be redeemed.

All situation can be redeemed.

Redemption is available for The Prodigal Son, the Adulterous Woman, Amanda, me and you. Even the prisoner crucified beside Christ at Calvary – the man destined for hell, yet was redeemed by Jesus to join Him in heaven. Not by anything he did, but his belief in Jesus.

Please pray with me:

Lord, I ask you to show me areas that need Your redemptive power. Please continue to teach me Your truths and point out the areas of sin that I need to turn away from. Refine me God. Show me the situations and people I need to forgive so that I don’t harbor bitterness. I want to be free of the harm sin has already caused and break through its hold. Thank you for Your grace and salvation to cover my transgressions. Amen.

*I’ve had the opportunity to work alongside Jeff Korzenik and attend many of his economic and business debates favoring hiring second chance employees. Upon reading his research on the population of people incarcerated and continually judged by their unwise and often immature decisions, you too might like to provide opportunities of hope as Ephesians 4:28 describes:

“Anyone who has been stealing must steal no longer, but must work, doing something useful with their own hands, that they may have something to share with those in need”.